keshi ups the ante in his new video single, “GET IT,” dialing up a new energy that’s fresh from anything he has delivered to date. Today’s release coincides with the announcement of keshi’s debut studio album, GABRIEL, which is set to release March 25th via Island Records. On “GET IT,” keshi, who has earned more than 1.6 billion global streams, flexes the lifestyle he’s worked hard for (“Got my bag right/On my own time”) and invites his fans to come join him (“On me and we spendin’ all night, come and/Get it, get it, get it”). Sonically, the track is bass-heavy with siren-esque ad-libs as keshi alternates from an elongated falsetto to a more structured cadence, pushing keshi further into his own lane. Genre-bending comes naturally to keshi who frequently cannot be pinned down to one genre, and “GET IT” shows how far he is able to expand as an artist and producer (alongside co-producer Elie Rizk), while maintaining that signature keshi sound. The video, directed by the late Sebastian Sdaigui, is a masterful pairing, taking as many twists and turns as the song. With leather-clad keshi and friends wilding out in a romantic, Victorian setting, the video mirrors the track’s soft and hard juxtaposition. Following up singles “SOMEBODY” and “TOUCH,” “GET IT” shows the sonic range and emotional depth to expect on GABRIEL.

After the release of GABRIEL, keshi will embark on his first headlining tour. The “HELL / HEAVEN” tour hosts dates in Europe and North America this upcoming Spring 2022 with stops in London, Paris, Berlin, New York, Los Angeles, and many more cities before finishing his tour in his hometown of Houston, Texas. Due to overwhelming demand during pre-sale, several venues have been upgraded to larger rooms and several cities added a second date before the tour sold out entirely. This marks a monumental moment for keshi as it shows his global reach and loyal fanbase.

ABOUT KESHI:
Monikered as keshi (stylized), a phonetic play on his name, Casey Luong has amassed millions of fans through his genre-bending songwriting and production without ever releasing a full album. Now, the Vietnamese-American artist hailing from Houston is gearing up to release his debut album GABRIEL, his most personal effort to date to be released via Island Records. A fusion of keshi’s real-self and his artistic persona, the songs are written from the lens of Casey and keshi and speaks on both his personal life and allowing the ego of keshi to take over. When keshi decides to flex how far he’s come, you get a fusion of alternative pop meets hip-hop, and when he deals with relationships and love, you get sweet serenades. For GABRIEL, keshi worked with Baltimore producer and songwriter Elie Rizk (known for Bella Poarch’s “Build a Bitch”), who co-produced the album with him.

With over a billion listens worldwide, keshi has gone on to become a streaming force with his acclaimed trilogy of EPs – Skeletons (2019), Bandaids (2020), and Always (2020). A self-reliant artist, keshi wrote, produced, engineered and played all the instrumentation on the projects, which when pieced together, the names of the three EPs describes the cycle of a relationship. His initial success includes making his Billboard debut when skeletons hit #59 on the Top Album Sales chart. Most recently, keshi appeared on the 88rising-curated Shang-Chi and the Legend of the Ten Rings: The Album for his song “War With Heaven.” It adds to a growingly impressive resume that includes getting co-signs by BTS members Jungkook and RM on their personal Spotify playlists, as well as a collaboration with producer Madeon on “beside you.” Last summer, keshi was also YSL’s special guest at their Venice show. With no signs of winding down, keshi is laser focused on the mark he wants to leave behind. And while he has high expectations for himself at 27, he is confident that his upcoming studio album GABRIEL will stand the test of time. “I think the biggest goal for me right now is to create a record that will outlast me,” keshi says. “I always talk about it as an opus record. I see Blonde as an opus record. I see Continuum as an opus record. I feel like I’m in a constant search to make something on that sort of scale. I strive for that.” 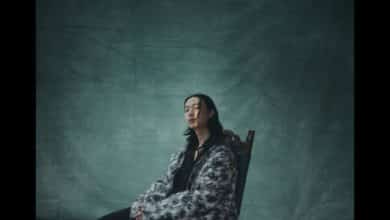